Types of Blockchain: Public, Private, or Something in Between 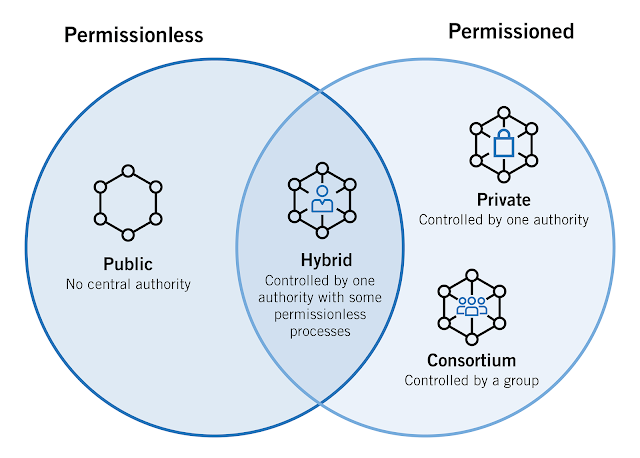 There are four types of blockchain structures:

Consortium blockchains are permissioned blockchains governed by a group of organizations, rather than one entity, as in the case of the private blockchain.  Consortium blockchains, therefore, enjoy more decentralization than private blockchains, resulting in higher levels of security.  However, setting up consortiums can be a fraught process as it requires cooperation between a number of organizations, which presents logistical challenges as well as potential antitrust risk (which we will examine in an upcoming article). Further, some members of supply chains may not have the needed technology nor the infrastructure to implement blockchain tools, and those that do may decide the upfront costs are too steep a price to pay to digitize their data and connect to other members of the supply chain.

A popular set of consortium blockchain solutions for the financial services industry and beyond has been developed by the enterprise software firm R3.  In the supply chain sector, CargoSmart has developed the Global Shipping Business Network Consortium, a not-for-profit blockchain consortium which aims to digitalize the shipping industry and allow maritime industry operators to work more collaboratively.1

Hybrid blockchains are blockchains that are controlled by a single organization, but with a level of oversight performed by the public blockchain, which is required to perform certain transaction validations.  An example of a hybrid blockchain is IBM Food Trust, which was developed to improve efficiency throughout the whole food supply chain. We will discuss IBM Food Trust in more detail in an upcoming article in this series.

Endeavor To Where It Matters! | Economic Calendar by TradingView